It was Sunday, April 10th, just a little after Noon, and we were crossing the Chesapeake Bay Bridge-Tunnel returning from a trip to Florida. The speed limit was reduced to 50 mph and the wind was howling a steady 40 mph with gusts up to 60 mph, and white caps on the bay.

Our silver mini-van, affectionately called “Minerva,” was buffeted about, but stayed true and steady on the path.  The bridge is 12-miles long and we were in the last 600 yards when i heard what sounded like a small rock hitting the side of the van.

“Didn’t you hear that sound?”

Back to reading my book.  Not more than two minutes passed when there was a loud rattling sound.

Another minute passed. “You know that doesn’t sound like the luggage rack sound.”

“Let’s pull over on the next side street and take a look around.”  We did. We both got out of the van and peered at all four tires, under the van, and over the van.  Shrugged as we found nothing visually amiss.  Hopped back in and went back to highway 13 in Cape Charles, Virginia.  The noise was louder now and more a clunking sound than a rattle.  R put on his flashers and slowed down to about 20 mph as I looked up the nearest gas station.  It was 1.7 miles ahead.  We clattered and clunked along.

We pulled into the station.  I went to the ladies room, R went in to ask about the nearest repair facility.  It was a Shell station 7 miles up the road. Back out on the road, we started up the highway.  Not 100 feet later the clunking sounded like a train running us over.

“This van is not going to make it seven miles. Let’s go back to the Citgo station.”

Then the van started to shake, the steering wheel had a quivering life of its own.  R made a quick U-turn across the divided highway, sidled over onto the shoulder, and crept up to the gas station entrance.  Twenty feet into the parking area, the left front wheel clunked off the van and started its independent journey headed for the highway. 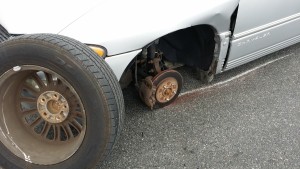 Jolted, but unhurt, both R and I jumped out of the van in pursuit of the meandering tire.  Fortunately, it hit a curb, swerved to the left, and just averted heading into the oncoming traffic when I caught up with it and stopped its progress.  Phew, that was close.

“Sure, we need a long tow.  How many miles do we get for a free tow?” Luckily, we had the premium level coverage.

Four hours later, two in the cab of the tow truck, we are nestling the van in front of the repair shop.  They will pay to have the work done since they had just taken the four wheels off to install new struts and shock, the day before our trip to Florida.  Obviously, the nuts on one tire had not been torqued.

But, the weirdest part for me a least, was that I never worried about any consequences until it was all over and I realized we could both have been killed, along with perhaps several others, had that wheel come off as we were traveling perhaps 65 mph on the Interstate.  Then it struck me how fortunate we were, and how much worse it could have been. I started to cry.  Thank you Jesus.