When my second husband was courting me after my divorce, he gave me a copy of the book Jonathan Livingston Seagull which we both loved and often talked about.  Later in our courtship, he gave me a gorgeous sterling pendant of several seagulls along with a touching love letter.  The letter described our relationship as those of two seagulls who fly together for a while, separate to fly on their own, but in the end always come back and fly as one. True to his vision, although we are often apart in many things and many ways, to this day we always come together in love. 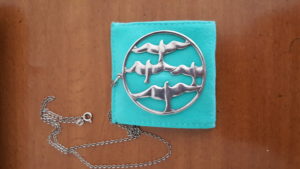 Five years after our marriage, my Jonathan flew far, far away and hurt me deeply. In some respects that old hurt comes back to haunt me from time to as a fleeting memory now some thirty-five years old. It doesn’t hurt as much, but it is an unwelcome visitor. As we were flying back together lo those many years ago, I thought it might be a good idea to give my errant love a Jonathan reminder similar to my pendant.

Our local jeweler crafted two gold Jonathans in flight together and I selected a light chain on which they would be hung. I didn’t want a heavy chain, but a light one that would be a reminder of our linked marriage vows, but not be suitable to represent a ball and chain.  We both still needed that room to go our separate ways from time to time.

Now, almost thirty-nine years later, my Jonathan wears his pendant with pride, enjoying telling others of our Jonathan story and he has never flown so far away since.  I do too. I also have a similar pair of Jonathans on my charm bracelet.  We call them our “logo,” our love symbols. And, I still have that letter along with all his other love letters. Maybe someday my children will find them and understand what binds us together as two Jonathans.