I can remember oh, way back in the 1980’s when women were screaming about “potty parity.”  “Why don’t we have more stall in our public facilities?”

“It isn’t fair.  Men have the same number of stalls, but us women go to the bathroom in much greater numbers. We have to wait for—ever, like because well, um, er just because.” 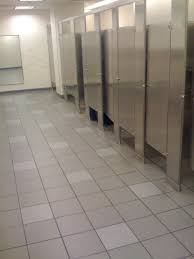 Well, the upshot was we women got more stalls.  We still have to wait in long lines.  What’s up? My theory is men have bigger bladders so they don’t have to “go” as often.  Why?  Simple.  They were out there in the wilds being hunter gatherers and needed to hold “it” longer. Furthermore, they have these things called urinals which hastens the pee time to practically nil.  In, unzip, pee, shake, zip, out the door. And I seriously doubt men ever wash their hands.  Ever. Really? Who knows for sure, but that’s my story and…you know the rest.

Today, we have a different kind of potty parity being parlayed throughout the land.  Okay, not the entire land, but a big part of the land.  It’s called the “Bathroom Law.”  I call it potty dis-parity, for lack of a better word.  By now everyone in the world has heard about it. It’s the law that says a pre-operation transgender person must use the public restroom of their genetic, or biological gender.

The reason behind this law is rather, uh, stupid.  A group of supposedly intelligent legislators decided that if a transgender male to female used the female bathroom his hormones might rise to unimagined levels and he might rape a girl.  They threw in women’s locker rooms to protect college athletes.  Mind you, this has never happened.  Ever.

The flip side of this law is a female to male tranny might what? Go into the men’s room and seduce a man?  This has never happened either.  So imagine this…you will see what appears to be a woman walking into a men’s room, past the urinals, and into the stall to pee, come out, wash her hands, and leave. And, you will see what appears to be a male walking into a woman’s room, standing in line with everyone else, finally getting a stall, peeing, and leaving.  Remember, men don’t wash hands.

The most logical next question is this: How or who is going to check these trannie genitals?  Will there be a guard at the doors who will ask each person to pull up his or her dress, or drop his or her drawers, pull down that thong or undie for a “G-check?”  That’s “Genital-check.” 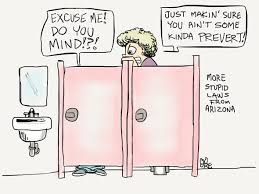 Perhaps they will have special staff who do nothing but go around looking under or over stall doors for compliance.

Maybe they will install hidden cameras in every stall to take a peek as the task is being accomplished.  Maybe there will be foot sensors on the floor that will determine if a “woman” is peeing with her shoes facing toward the back rather than the front.  Come on.  Am I the only one who sees the inherent insanity in this whole bathroom law?

Why should I care?  Because I am the mother of a transgender male to female, and I understand the implications of gender dysphoria.  These people aren’t kidding you.  This isn’t some condition that can be cured, or turned on or off.  This is real.  These people while genetically one gender, are psychologically the opposite gender.  To force them into a bathroom not of their psychological gender is an embarrassing and debasing situation.  Think about it.  If you as a genetic male were suddenly forced to use the ladies room how would you feel?  Or you, as a genetic female were forced to use the men’s room, how would you feel?  Listen stupid, trannies feel exactly the same way.  Because it isn’t about what’s between your legs, it’s about what’s in your heart and head.

To all ignorant legislators who either have already passed this inane law, please repeal it.  And, if you are even thinking about passing such a law, forget about it. There is a simple answer.  Make all our restrooms unisex.  Eliminate those nasty urinals, put in extra stalls, and you’ll for sure have potty parity, not dis-parity.