Well, there you have it.  Donald John Trump is our 45th President of the United States.  I was devastated when he won because I so wanted a woman in the Oval Office.  And, because I didn’t believe all the propaganda about Hillary.  I also wanted Hillary to win because I believe Donald Trump is not a man of the moral fiber I want as my President. 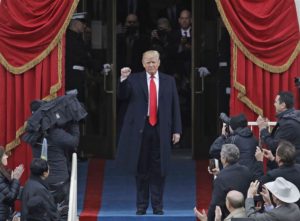 But, there you have it.  He is the President.  Like it or not.  No going back.  A recount failed, and that’s about $5,000,000 that might have been better spent on affordable housing or feeding the hungry.  The electorate didn’t have a landslide of “rogue” voters.  It is a done deal.  Many are saying, “Get over it,” or “Move on,” or “Deal with it.”

Okay, I’m willing to deal with it, but I may never get over it.  And, I will move on. I will read my constitution so I will know when DJT violates it.  Then I will hold him accountable.  I will also have to listen to his press conferences and follow his Executive whatevers.  Not that I want to – I don’t.  I really don’t ever want to see his face on TV or hear his voice on the radio.  I don’t want to read column after column on what he’s doing.  But, I will.  I need to be informed.  I need to know what he thinking, doing, attempting, everything, every day.

So, I will listen to his speeches, his press conferences, his radio voice, anything, anywhere I can get my hands on what this man is doing.  Because, if I don’t I have no leg to stand on when life in America goes south due to this man’s actions.  And, I urge you to do the same.  We must be united.  DJT won this election because he practiced the rule “Divide and conquer.”  He divided Americans as no other politician has in maybe decades.  He conquered the electoral vote, not the popular vote.  He won. 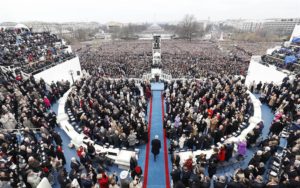 So folks, united we stand, divided we fall.  See all those people in the above photo? Let’s all unite to hold the man walking to be sworn in as the 45th President accountable for everything he does.  And, when he fails to do anything, anything that is not in the best interests of all Americans,  we must, as a united front, call him on it and not let him get away with it.  And, when I say “all,” I don’t just mean those who voted for Hillary, or Johnson, or Stein, but ALL people in America, even those who didn’t vote for anyone or voted for Trump.  We must be vigilant, we must guarantee that the values and freedoms we hold dear as Americans are upheld.  I know we can do it.  So, let’s get started.